For parents of a certain age, the sound of summer is no longer ice cream van chimes or garden sprinklers. It’s the click of a key in the front door and the pulse of unfamiliar music from upstairs. Because, right now, thousands of UK students are returning from university to spend the next few months lounging round the family home – and, in the case of many recent graduates, there’s no certainty that they’ll ever leave again.

The statistics paint an alarming picture for parents who were hoping to turn their child’s old bedroom into a guest suite. In the past 18 years the number of 20 to 34-year-olds living with their parents has increased by 669,000 – a 25 per cent rise. By last year, a huge 49 per cent of 20 to 24-year-olds were still living at home. Of course, it’s possible to blame the recession and lack of graduate jobs for such a comprehensive failure to launch. However, the main issue for parents welcoming back overgrown infants trailing clouds of laundry is often less economic and more emotional.

And yet, while there are a thousand and one books, anecdotes and experts pouring forth advice on parenting babies, children and teenagers, the moment our offspring turn 18 we’re met with a resounding silence. 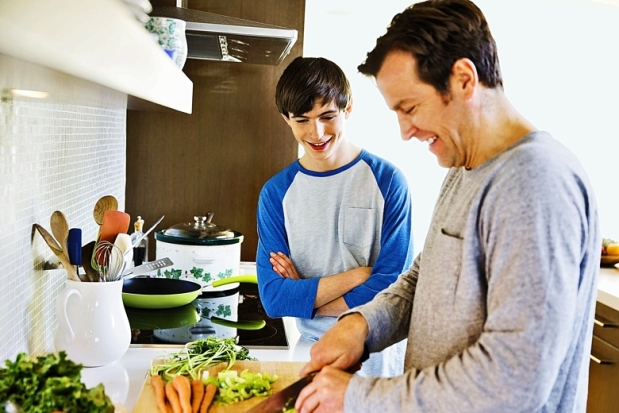 My own son Wolf, 21, left home for university three years ago – and now he’s back for the summer. And while on paper I understand that he’s a grown-up, and that I have no control over his choices and behaviour, the urge to parent doesn’t go away. When our children live with us, no matter how old they are, parenting instincts somehow kick in. Maybe letting them live under the same roof magically makes us think they’re little kids again. Setting up a backyard guest house where they can feel comfortable and do what they want might help create some distance, giving parents the feeling that their kids are now adults. It’s a win-win for both sides of the dynamic. But more often than not, parents are unable to let their children be as independent as they wish to be. In fact, few could raise a beloved child to young adulthood and then abandon all responsibility as the smoke rises from the 18th-birthday candles. As a consequence, parents are left to negotiate an entirely new relationship with the heavy-drinking, sexually active chick whose legs are now dangling over the edge of the nest.

At three am, the worst fears gather. I’d been awake for hours, and there had been no text from my son, no key in the lock. In my mind, he was unconscious on the pavement, his white-faced friends frantically scrolling for my number. Yet it wasn’t as if he was even due home that night – a few weeks earlier, he’d left for university, and my old certainty about where he was and with whom, had been replaced overnight by a continual low hum of dread. As a parent who had always been more Special Ops than helicopter, I had no idea how to stop worrying, and accept that I no longer had the power to keep him safe.

That was three years ago- and I have had no choice but to get used to Wolf’s absence and accept that if he isn’t on Facebook for a full day, it’s more likely due to a hangover than a drive-by shooting. But it’s hardly been a case of waving him off to adult life, and then cheerily turning to my new regime of zumba classes and book groups, as most glibly supportive ‘empty nester’ websites suggest.

“As our children grow up, the roles switch – and whereas they were once dependent on our approval and commitment, parents begin to rely on their grown children for signs of affection,” says the psychotherapist Rachel Morris, the author of The Single Parent’s Handbook (Pearson). “We hope they’ll ring, and come home – but there are no guarantees. That’s why it’s essential to understand that everyone’s needs have changed and not to try to maintain the old relationship of child and controlling parent, particularly when they move back home as adults.”

Even if grown children don’t boomerang back, they may be travelling abroad, posting terrifying Facebook updates (“Can’t wait to try ayahuasca tonight!”), struggling with debt, drinking too much, or trapped in a dead-end job or relationship, far from the easy parental succour of lifts into town and bedtime chats.

And yet, despite the inevitability of children growing up, there has traditionally been very little help for parents struggling with the transition – a problem that the psychology professor Jeffrey Jensen Arnett, the author of Getting to 30: A Parent’s Guide to the 20-something Years (Workman), aims to redress.

“Parents have to learn to step back while also staying connected,” Arnett says, “but it’s not always easy to discover where that balance should be.”

While any drunk 16-year-old staggering in at 4am can expect a wild-eyed mother in a dressing gown to be waiting at the window, suddenly accepting that your grown-up child is bobbing over the horizon on a sea of cheap cocktails is tough. And whereas in the past parents were at least able to half-believe their child’s wholesome claims in irregular letters home, social media now means that the hovering parent is party to every party – however debauched – and there will inevitably be online photos featuring offspring passed out amid an exploded piñata of empty tequila bottles and fag packets by the next morning.

I was relieved when my son allowed me to be his Facebook friend when he was 15 – I had no idea that six years on I’d be piecing together an alarming timeline of unwritten essays and lost dawns from his cryptic updates. Perhaps I shouldn’t be reading them – but at 21 is he truly a grown-up now, or does the fact that he still needs cash injections and comes home when things go wrong allow me a stake in his life? Arguably it does, says Arnett, who defines true adulthood by the triumvirate of “accepts responsibility for own life”, “makes independent decisions” and “becomes financially independent”.

Even so, the idea of “flying the nest” is becoming increasingly redundant in an economy where a studio flat is an unaffordable dream for many twentysomethings. And, with more than a quarter of 20 to 34-year-olds now living at home and about 70 per cent still financially reliant on the bank of Mum and Dad, at least to some extent, adulthood is now unavoidably deferred – often till 30 and beyond.

“There’s no doubt that parents are less strict and more supportive now than they were a generation or two ago,” Arnett says. “Some people think it means parents overindulge their kids,” he acknowledges. “In general, though, research indicates that if parents support their children during their twenties, financially and emotionally, the kids do better in the long run, compared to children who receive less support.”

There may even be unexpected mutual benefits when grown children move back home, says the family psychotherapist Linda Herman,the author of Parents to the End (NTI Upstream).”Multigenerational living is making a comeback,” she says. “There are benefits to this, such as the sharing of expenses, child care, the emotional support between several generations . . . but the success of all these arrangements depends on good planning.”

And, whether living together or not, it’s essential to accept that the rules have changed. “Friction is sometimes necessary between parent and child for separation to occur,” Herman says. In fact, the summer before Wolf left home, we had never rowed so much in our lives. At the time I found our sudden antipathy devastating – but in retrospect it was an essential step in letting go.

“I talk about the three Cs of parenting,” Herman says. “Parents ideally move from being the choreographers of their children’s lives, planning out every step, to coaches – still providing guidance – to consultants. As consultants we are there for input if asked, but we know they may not take our suggestions.”

The tricky part comes when the old rules and expectations remain in place – so it’s important, Herman says, to renegotiate a new set. “The adults who are going to live in the household together should sit down and discuss their needs and expectations,” she suggests. “Grown children will expect more freedoms, and more can also be expected of them for the same reason. Issues such as privacy, drinking, smoking, or substance use at home may be relevant topics, as well as division of housework, rent – and whether there’s a time limit to the arrangement.”

If all parties agree, she says, there’s no reason why parents and adult children can’t all live at home happily – at least for a period. The biggest issue, however, isn’t who washes up, or curfew times. As I learnt, when my son and his long-term girlfriend broke up a couple of years ago, it’s when a grown child is in pain – and you can no longer cheer them up with a Disney DVD and a cuddle. Instead, the only possible option is to stand by, and let them know that you’re there if they need you. Witnessing my son’s pain was far worse than feeling it myself, and all I could do was buy him lunch, give him cash and dispense a few, probably useless, bits of advice.

What happens when it falls on deaf ears? “There are times when they clearly need help, but kids won’t let their parents in,” Arnett says. “Parents sometimes have to accept the hard truth that their kids are going to make their own decisions, even if they’re ones that the parents see as unwise.”

Standing by watching the child you’ve spent a lifetime protecting, nurturing and supporting make choices that are almost certain to cause them trouble is perhaps the hardest aspect of parenting. I look back now at my impetuous decision, aged 21, to drop out of university and get married, and I am staggered that my parents didn’t expire with horror. Instead, they allowed me and my wildly unsuitable husband to move in with them (“it’s only temporary”), did not throw me out when I found myself pregnant two months later, and brushed me down after the inevitable blood-soaked divorce by 25.

I now realise that I was no grown-up at all – I was still working on forethought-free adolescent principles, without any experience to temper my decisions. And that may be the hardest thing about parenting an adult child – allowing them the chance to make terrible mistakes, and still being there when the consequences crash in.

“The emphasis is on being a guide, not the “fixer” of the problem,” Herman says. And no matter what – substance abuse, mental health issues or debt – “Parents cannot make a troubled adult child get help,” she adds. “That said, it is important to step up if you think your child is on the wrong path. Sometimes just asking, ‘How can I be helpful to you in this situation?’ is enough.”

While an emotional bail-out is recommended, when it comes to financial matters, Herman says, parental steaming-in can do more harm than good. “Parents should not take on their child’s debt,” she warns. “When they do, they send the terrible message that the child need not be an adult. The longer a parent bails out a child, the longer it will take that child to grow up.”

But when they inevitably do, perhaps that’s when their loving, anxious parents can finally begin to let go.

This article is provided by http://www.Brotherkitchen.com.au