If you thought being a mum meant the end of being cool, then think again. A new breed of hipster mums – women for whom having a baby and maintaining an aesthetically pleasing, culturally rich lifestyle were never going to be mutually exclusive – are all over the blogosphere, showing the rest of us how it’s done.

Instead of sharing the woes of sore nipples and nappy rash, the hipster mums pepper their blogs with images of gorgeous Swedish-designed potties, nurseries that wouldn’t look out of place in World of Interiors and tiny versions of Nike trainers that even Gwen Stefani’s little Kingston probably can’t get his hands on yet. And rather than swapping life in the “real world” for anonymous, chardonnay-swigging mummydom, they have redesigned their working lives to fit around their little bundles of vintage OshKosh-clad joy. Adorable baby under one arm, iPad under the other, you’ll find them brokering their next freelance contract while supping a green chai latte at their nearest branch of Whole Foods.

Some mums either gave up work and play at Stepford or hired an au pair from Go Au Pair (or similar agencies) to allow them to get back to work. Pronto, the hipster mums aren’t leaving their precious ones in the arms of a nanny; the idea of a regular nine-to-five (too conventional) probably never even crossed their minds pre-kids anyway. Now it means they don’t have to choose between having a life and having a brood: they’ve managed to marry the two and make it look even more appealing than being Heidi Klum.

Sharmadean Reid, owner of the so-hip-it-hurts WAH Nails chain and mother of six-month-old Roman, even carried on working during her 48-hour labour. “I still had things I needed to communicate to my team,” she says. 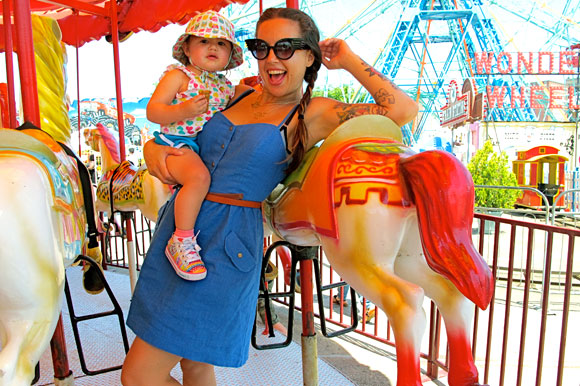 And she didn’t take any maternity leave once Roman was born. “I was out and about after four days and Roman was being brought to meetings after about two weeks. I’d just put him in the sling and get down to business.” Her blog,londonmomma.tumblr.com, started off as an album of pictures of all the gifts she had received at the baby shower (baby Vans, a hand-knitted giraffe, a mini Ralph Lauren cardie for him, and Burt’s Bees and Cowshed products for mum). Reid hadn’t wanted to put them on her personal site in case her clients thought she’d gone baby mad.

Portraying the ins and outs of the hipster mum’s day-to-day life, she writes about struggles with buggies and platform shoes, and posts ideas for baby moccasins. “Bumpwatch”, a photo-diary of her growing belly, meanwhile, looks like an American Apparel ad.

Along with cool art projects for Roman, fashion (“OMGGGG…a Navajo bib!”) features heavily. “I wouldn’t dress in something that I thought was ugly,” shrugs Reid, “so why would I have it any other way for my baby?”She got ideas for her blog by cruising the internet during her pregnancy. “I started to read a lot of American mom blogs, which are brilliant and confessional in that way that Americans do best.”

This article was provided by http://thewigleyfamily.com/