School nurses and public health officials have been told to tone down the way they tell parents that their children are overweight.

The letters have been “revised” from last year after feedback from experts and parents.

Public Health England writes: “When editing the wording in a result letter, or when developing local letters, it is important to consider that parents receiving the letter may be sensitive to the information and feel that their parenting skills are being criticised. As such, as far as possible, the letters should be non-judgmental and positively phrased.”

In letters sent about children classed as “very overweight”, parents are no longer told: “Doctors call this clinically obese.” Parents are told that their children could face health problems and low self-confidence in later life but the letter no longer says that they risk “heart disease and some types of cancer”. 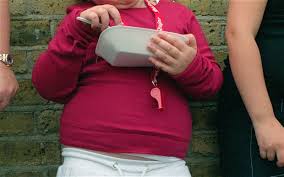 In the letter about overweight children, two sentences have been removed. They said: “You might be surprised your child’s result is in the overweight range. It can sometimes be difficult to tell if your child is overweight as they may look similar to other children of their age, but more children are overweight than ever before.” The new letters also omit references to body mass index.

Tam Fry, of the National Obesity Forum, said it was “horrendous” for public health officials to send out automated letters rather than speak to parents personally. Health professionals would be able to offer “tough love and call a spade a spade” if they talked to parents face to face, he added. “The role of school nurses and GPs, when seeing a child who is putting on unhealthy weight, is to be able to say to parents, ‘You may not like what I’m to tell you but you’re child is getting too fat and you really need to do something about it’. It’s ridiculous not to say ‘obese’. That’s the proper word for this level of fatness.”

Last year more than a million children were measured by the programme which found that in reception year, 22.6 per cent of children were overweight or obese, rising to 33.9 per cent in Year 6. The proportion of children who are clinically obese doubles from 9.5 per cent at the start of primary school to 19.2 per cent when they leave.

Ann Hoskins of Public Health England, said: “We’ve listened to feedback from parents and local authorities and as a result, the template letter has been simplified to make it easier to read and more personal.”