A study this week found many parents have no idea how to guide or keep their children safe on the internet. Here’s how

I confess, I don’t know my Tumblr from my Flickr, declare video games a bore and have resisted an online presence. I’m a typically ignorant parent; a cyber-snob. I have three sons aged, 11, 9, and 7. Can parents of my generation really afford to be so clueless?

A study this week has made me resolve to change my ways:43 per cent of children aged 12 and older have messaged strangers, according to research by online support site knowthenet.org.uk. Over a fifth have posted negative comments, and a quarter have hijacked another person’s account and posted without permission. Meanwhile, only 32 per cent of parents feel very confident about helping their kids stay safe online, and many have no idea how to install parental controls. It’s essential for adults to understand this parallel universe. How can we guide them through it otherwise?

Too many of us stick our heads in the sand, proudly declaring that we loathe the internet and social networking. “It’s a dangerous attitude,” says James Diamond, of esafety.guru. “The first thing that stops teenagers telling parents they’ve got into trouble is they think: ‘My parents don’t understand the internet, the social media site, the game I’m playing, so they can’t help me; I’m not going to tell them,’ ” Diamond says. “You don’t need to open a Twitter account, but you do need to know what your children might be up to and help them make safer decisions.” 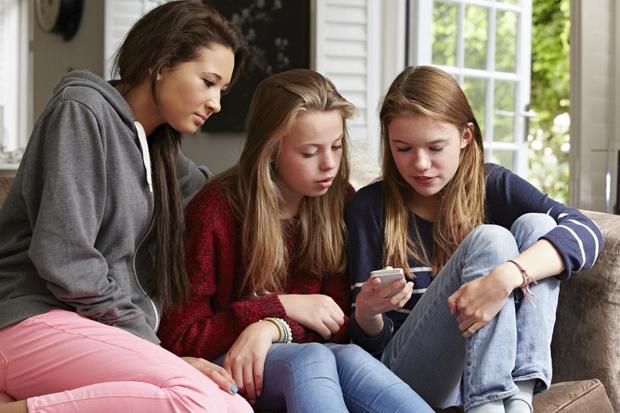 Diamond says: “Sexting has been a huge issue: teenagers sending pictures of each other, which are shared, and — apart from being a very serious criminal offence — cause emotional harm. But I can’t help thinking that if we’d had access to digital cameras as teenagers, we’d have done the same. Our children aren’t different from us, they’ve just got different opportunities.”

But our wilful ignorance causes us to panic. So teens fear if they confess that they sent a naked selfie that is being shared, their parents will confiscate their phone. Don’t take the risk that your child won’t trust you. Diamond says. “This connection with their peers is so important, they’d risk further harm rather than give it up. So our response must be ‘You’ve done the right thing by telling me, we’ll fix it,’ not ‘You’ve done something wrong.’ ” Support, don’t blame.

The truth is, most parents are weak on time limits. Because, of course, there’s nothing more delightful than relaxing with a coffee and the paper, knowing that your teens are happy in their online world, rather than marauding round the park or roaming the streets.

Then you finish the paper, feel vaguely guilty, so you take away the iPad, and minutes later, they’re hunched over their smartphone. “It’s a battle, but you must persevere,” says Dr Terri Apter, senior lecturer in adolescent development at Cambridge University and author ofThe Myth of Maturity.

Andy Phippen, Professor of Social Responsibility in IT at Plymouth University, says: “There’s quite a lot of agreement that excessive screen time is bad for child development. It’s fundamental stuff like tiredness, but also their attention span and mood can be affected, and they end up not wishing to interact with the real world. It might affect behaviour. Teens who play games online — not necessarily war games — admit they feel it makes them feel aggressive. When they come out of the game, even a football game, there’s an attitude problem. ’

Play Minecraft and other games with them — and start young

Even if the prospect makes you long for the days of watching Dora the Explorer, playing games with your teen, preferably ones that don’t involve blowing peoples’ heads off is, says Dr Richard Woolfson, a child psychologist and expert for knowthenet.org.uk, “a 100 per cent yes. Any chance you have to connect with your child and be involved, snap it up. You do a jigsaw, read a book, why shouldn’t you play an online game? Far better than saying ‘It’s a load of nonsense, not for me, do your own thing.’” He adds, “You can model good internet behaviour; teach them that you start — and you finish, perhaps one, not four hours later.”

My 11-year-old Blackberry-messages his father, aunt and grandma (even if they can’t quite understand the slang). And a friend’s daughter expected her mother to friend her on Facebook, and follow her on Instagram. Seven out of ten young people have parents as friends on Facebook.

They want some privacy, but why do we assume they want to hide their activity online from us? As Dr Woolfson says, “If they were watching a TV soap, and you sat beside them, they wouldn’t feel their privacy had been invaded. Invite them to show you things. It’s a way of saying I’m interested in your world.”

This interest and involvement should begin from a young age — rather than pouncing on them in a panic when they’re 13.

There is no escaping the fact that having a conversation specifically about porn with your 11-year old is, says Professor Phippen, “the 21st-century conversation about the birds and the bees. You do have to address what they’re going to see, and whether that’s normal.” It doesn’t require you to be graphic, and if you can’t bear to look your teen in the eyes, have the conversation in the car. Professor Phippen says, “I’ve had conversations about rude things you might see with my 9 and 10-year-old. You can say ‘there are some things on the internet that aren’t for children,’ that if they see something, to come and tell me, and they won’t be told off.” We have to banish embarrassment, because honest and brave communication and explanation is our best weapon; it helps steel our children who will, inevitably, see content that disturbs them. Indeed, as Professor Phippen says, “They get upset about seeing RSPCA adverts, it’s not just the sexual stuff.”

Who should they be friends with online?

Last week, an unknown name popped up on my e-mail, inviting my 11-year-old (via his e-mail address) to “a group conversation” on Google+. After four e-mails in as many minutes, I blocked him. Diamond says that if in doubt, block. “It’s not overreacting. At least then, no one can get into trouble.”

The approach was possibly less sinister than I supposed — Diamond suggests it was an automated e-mail sent by Google. (The more we over-share and collect “friends”, the more data networks can provide to advertisers.) Diamond says: “If you’re not paying for the product, you are the product. When you sign up to Google and a notification pops up saying ‘Do you want to invite your friends?’ If you click ‘yes’ it ‘invites’ every contact in your address book. The person probably didn’t even realise the invitation had been sent.” But, he adds, “if you don’t already know this person through another form of communication, should you be connecting with them?”

Circles are a function of Google+ (a rival to Facebook) and are used to categorise contacts into groups. While most teens aren’t using Google+ as a social media site, many will have an account by default — thanks to pushy Google (to comment on a YouTube video you now need a G+ account.) A friend’s 12-year old was drawn into an undesirable circle, via Instagram. Alas, it can be as simple as someone contacting your teen on Instagram, saying “Great pic! Add us on Google+ and join our circle!” In her Google+ feed, she’ll then receive messages from that group.

Professor Phippen says: “This highlights that teens — and adults — often don’t realise what they are signing up to. When you get a Google login, this becomes your login to all Google services and unless you’re careful, you might end up signing up for Google+, without realising. Then you can be invited to join a circle, full of people you don’t know.”

This sort of predicament is becoming more common, partly as young people fragment their social media use (Twitter, Instagram, Facebook Messenger, etc) and bounce between them. They may join services they don’t fully understand. Social media can trick us into sharing with people who aren’t our friends. Encourage your teens to confidently refuse — just as they wouldn’t go off with a stranger in the park.