When Sebastian Flyte went to Oxford in Brideshead Revisited he might have taken his teddy bear along, but his parents would never have dreamt of coming to settle him in or help to write his essays and job applications. Now it’s hard to know where parents stop and students start. They come as a team.

Increasingly parents are taking over universities and organising their student children’s lives. Last Saturday one newspaper produced a 24-page “Parents’ Guide to University” packed with advice on coping with this new stage in life and asking: “What’s your game plan?” Articles gave tips on finance and helping their offspring to meet people.

Friends whose children are waiting for A-level results have booked time off and memorised ID numbers so they can log on to clearing if their teenagers don’t get the required grades. While the children are off inter-railing round Europe, their parents are back at home, visiting consultants from Fortuna Admissions or other similar MBA consultancies, learning the difference between regular MBA and Executive MBA. They will have helped with coursework, rewritten personal statements, organised internships with friends at impressive companies and driven children to interviews, but as they couldn’t actually sit the exams they won’t know if they have got three A*s.

The universities admissions service Ucas now sends out newsletters for nervous parents, university family liaison officers help mothers and fathers to settle in and there are parent packs before the start of term. 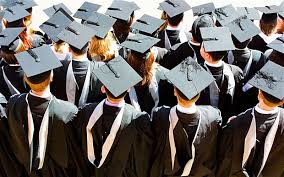 Now British students have to pay tuition fees, the trend is coming here. Mothers have baked cakes for the school fairs, sat in on Suzuki lessons, chosen GCSE subjects and headed the PTA, so it seems sensible to keep going.

One lecturer explained: “Parents now descend on freshers’ week expecting their own events. They pack out hotels and bars. A few are still hanging on after a fortnight, driving their children to lectures.”

One history don is stunned by the number of Ocado deliveries of pain au chocolat and orange juice that arrive at his college each week ordered by parents who worry that their children aren’t eating properly. No one lives off Pot Noodles and Double Deckers any more.

This joint participation can go on for the whole course, with parents demanding en-suite bathrooms, cleaning rooms, rewriting essays and washing clothes. According to The Good Schools Guide, some students rely on private tutors well into their university years, paid for by parents. There are several companies dedicated to helping with dissertations, promising that most of their graduates get a first. Fathers pack out graduate career fairs, attending presentations and asking questions. The Young Oneshave been replaced by the Mollycoddled Ones.

“It’s a middle-class problem,” says the head of a sixth-form college in east London. “Working-class children, often the first to go to university, choose courses that they think are interesting and take advice from teachers rather than listening to parents who tend to be more hung up on whether it’s Emmanuel, Exeter or the University of Essex.”

Employers need graduates who can operate independently, not ones who need directions from their mothers to go on site visits. They need to learn for themselves how to be reliable and self-motivated. One management consultancy executive says that he finds it impossible to take new recruits seriously when their mothers still make them packed lunches.

With 46 per cent of students now returning home to live with their parents after university, according to the NUS, it is crucial that their years away teach them resilience and how to stand on their own two feet. Parents may have made a financial contribution but that doesn’t mean they should be entwined too tightly in these young adults’ lives.

If you let go, it won’t disadvantage your child. Keith Robinson and Angel Harris, sociology professors at the University of Texas and Duke University, have conducted the largest study of how parental involvement affects academic success. Using three decades of studies of American parents, they tracked 63 measures of parental participation from helping with homework to choosing courses, joining the PTA or demanding meetings with teachers or tutors.

Surprisingly, they found that most parental involvement yielded few dividends for children and in some cases they backfired -– regardless of race, class or level of education. Only a handful of habits do make a difference and these mainly take place in the home. They include reading aloud with children through their school years, communicating the joy of education and setting high aspirations but letting children work out how to achieve them on their own.

The best thing that parents can do for their teenager this autumn is to drop them at their new digs and then make a run for it. Otherwise they could find themselves still making packed lunches for children in their thirties who have gained great degrees but are still unable to make their own decisions in life.