Water and essential services company, Yorkshire Water, leads the way as companies supporting Hull City of Culture 2017, having been announced as the first major sponsor. The sponsorship and subsequent announcement of their support could perhaps not have come at a better time as the company seeks to accelerate their drive to make Hull a model for environmental sustainability. 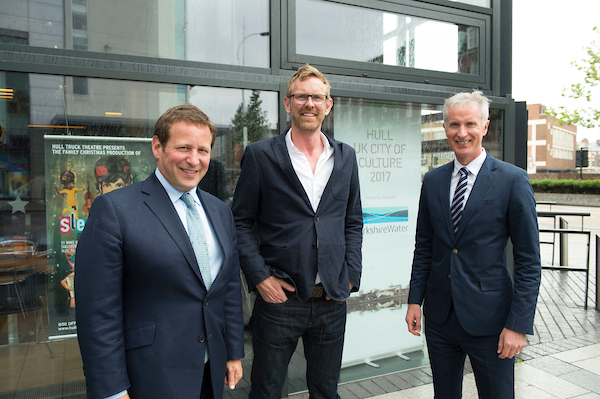 The water and essential services company is perhaps best positioned to make a real success out of this and their own initiative, as their core business entails supplying what are some of life’s most essential services to both the people and businesses of Yorkshire.

Over the past decade, Yorkshire Water’s investments have totalled more than £50 million, which was poured into the upgrading of Hull’s extensive pipe network, pumping stations and treatment works. This was with the aim of giving the city greater protection, much to the delight of the City of Culture chief, Martin Green.

Martin Green said he was delighted the company was throwing its weight behind 2017.

Mr Green said: “We are absolutely delighted to welcome Yorkshire Water on board as our first principal corporate supporter.

“As well as being part of a world-class festival that will engage and inspire millions of people locally, nationally and internationally, they will also help to build a new future for Hull, where the power of culture is being harnessed to regenerate communities and transform the city.”

Yorkshire Water’s chief executive Richard Flint said: “We are delighted to pledge our support for Hull 2017, which we are confident will put Hull and its surrounding towns and villages well and truly on the world stage.

“It’s a great way to reinforce the fact that we are an integral part of Hull, providing major social economic and environmental benefits to the city.

“As a company we are working on ambitious long-term plans for Hull which we hope local communities will get behind.

“Last year we enthusiastically supported the Yorkshire Festival and we aim to bring the same enthusiasm and experience to Hull, UK City of Culture 2017.”

Yorkshire Water’s water supply and waste water services reaches colossal numbers of over five million people, servicing two million homes and 130, 000 businesses. It has one of the lowest water and sewerage bills, coming in as the fourth lowest in the United Kingdom, and just last year alone, 22, 000 customers considered to be financially vulnerable were supported to the tune of £8 million in assistance.